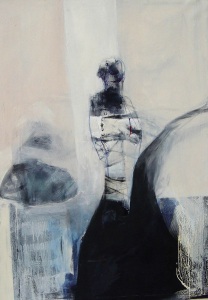 MARKO KOSTIĆ – text for exhibition Down the Current (Niz maticu), October 2002., Gallery of the Faculty of Fine Arts, Belgrade

The idea of alienation is very present in the modern world. In art, it was foreseen through the mannerist riddle for discovering a key to artistic expression in the world without ideals, where the goal is more important than the means, and material interests come before spiritual values. The protagonist in Natalija Simeonovic`s paintings alike Hamlet or perhaps Don Quixote, is lost in his surrounding puzzled and alone. He is not covered by darkness, the symbol of totalitarian repression, but by light as a metaphor for emptiness and illusion of freedom, so unnecessary for a person. Therefore we see him more as a question placed to the “brave new world“ , than as an answer to dictatorial control of society. Natalija Simeonović deals with the roots of the western post renaissance depression flowing gradually from a warmer pallet used in earlier years of her work, towards the current of colder, more passive volume accents.

Seeking the artistic “way out” in a world where there isn’t any, she paints a man who is far from life, distanced from his own essence, his individuality separated from his personality. Skillfully applying the white emptiness of the canvas, she invites the idea of the end and the beginning, claustrophobia and vastness, universal and substantial, nonexistence with the idea of multitude Redefining, even criticizing, the modern concept of human freedom, by contrasting accord of the emptiness of artistic material and expressiveness of visual accents, she joins not joinable. She also, discovers the continuity on the waste of civilization, an apocalyptic sight where a human is set between earth and the universe, between life and death. This exhibition is a shadow of doubt over our very existence and tries to send us a message that our consciousness of death is necessary for our understanding of birth, which inevitably comes after.