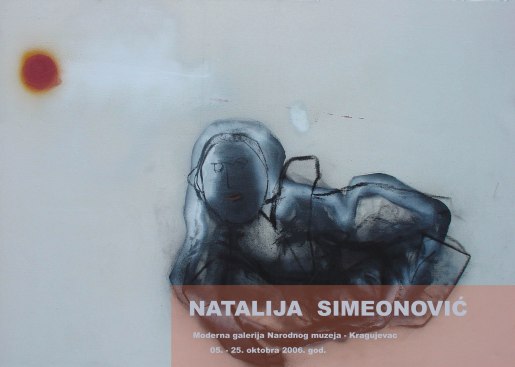 Link to news article about the exhibition

“Time is light. But light. What is light? ”
Starting from this unusual statement from Nikita Stanescu, one of the possible answers can be searched for in the canvases of Natalija Simeonovic. To seek, but not with any certainty to reach an answer, since we are in a dilemma at the very beginning: where does the light in her paintings come from, and over what kind of world? Which forms does it support, and which in turn, does it disclose in their unworthiness?

The world in Natalia Simeonović`s canvases does  not  “by definition” have to be a manifestation of her internal, but may and most likely is an observation of a person whose sensibility is not immune to planetary disturbances caused by man making himself the victim.

Founding a new “ontology” by her painterly poetics the artist presents us with a man who is almost an incidental phenomenon in the world that has killed definitions and systems. This world is overcome by entropy, turned it into a spot that is not a promising coacervate, but a sign of chaos. The metaphor of that the world is the man in the painting Standing. His “mission” is not only standing, but also waiting. A series of buttons on his clothes, light step forward with the right foot, a nonchalant hand in the pocket, and above all – the smile, give us the right to think that this bizarre dandy simulates confidence. His artificiality like a man being photographed is ridiculous to say the least, that is it would be, if it were not pathetic, devastating. His waiting is perhaps the kind practiced with zeal by the masochistic Beckett anti – heroes. Or perhaps, to our great surprise, we are faced with remaining few who are waiting for the Second Coming (which is not impossible because the light that surrounds him and that we receive from a large number of Simeonovic’s images are like after some great cataclysms). So, there is no black, no darkness that would indicate nothingness and emptiness, but it is the light that also opens like a abyss.

The new “ontology” requires a new “lexis”. The portrait of one of the people in this dissolved  world is addressed as  Down-heaving. How can we read this? As a down-heave. An option for the organization of sequences with the inevitable association towards the possibility of an interruption? As Downheaving – an enigmatic neologism that marks a new “physiology”? Or as a series of breaths, which would be a presumption of dissension, that is, the descent, a vertical downward movement all the way to absolute silence?

In one, let’s call it a kinesthetic interpretation, we could feel  Simeonovic`s paintings as  organisms that announce themselves with  barely audible, deep heavy sighs and the occasional hoarse sound of broken lungs. This impression is partly helped by the painter’s palette, which is parsimonious only by the choice of colors, but by no means with the dimensions of the created effects.

This site uses Akismet to reduce spam. Learn how your comment data is processed.