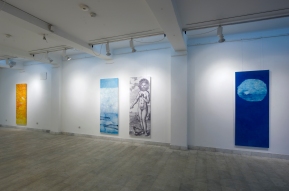 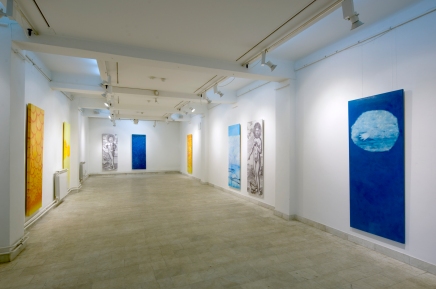 The conceptual aspect of the work develops on the level of expropriating an existing sample from the past – Maier’s alchemist book Atalanta Fugiens and decoding it structurally. The artist first takes the graphic emblem number 30 – representing a man and woman as  Sol  and Lune and their textual companions, the constitutive alchemical attributes of the pairs of opposites: chicken – rooster, mercury – sulfur, silver – gold, water – fire, earth – sky. If the configuration of these elements seen on the historical composition foretells the virtual threshold of the completed alchemical experiment and its “distillate” in the hypothetical dualist coupling of the pair into an ideal androgen being, as could be seen in the following emblem of the book, the artist’s original interpretation of these elements creates an open meta-structure of discourse on the life of the pair and the emancipation of their dualist natures.

By formally deconstructing the existing composition and the reintegration of its fragments into series of individual panel paintings of identical size (70×185), the artist replicates the position of the contemporary artist as a shaman or alchemist caught in the act of producing a series of experimental alchemic retorts: “The beginning of leafing through the original engravings was like moving the hands of the clock in the opposite direction. Firstly the male and female figures were separated in the form of prints in a format that are in proportion to the human body. Stencils were then made from the taken elements that were recomposed within the “male” and “female” symbols. By fragmenting and destroying the basic forms, the focus was turned to the facture of the painting and its materiality with the aim of achieving an ambient quality. The oneness of  space of the  painting itself was however sacrificed in favor of dislocating it into the unified plane of a gallery exhibit. (…) read more

This site uses Akismet to reduce spam. Learn how your comment data is processed.